It is known that less than 1% of bacteria observed in natural environments can be cultured under normal laboratory conditions, so the vast majority of microorganisms are unable to be studied with traditional microbiology procedures. Metagenomics, the application of sequencing techniques to DNA from microbial communities in natural environments, allows detecting the whole diversity of microorganisms and their genes in these kinds of samples.

The first main goal of metagenomics experiments is often to detect and quantify the microorganisms that are present. This process is called taxonomic classification or profiling. There are two main strategies to evaluate the taxonomic composition of a sample: amplicon sequencing (16S/18S/ITS) and whole-genome sequencing (WGS).

The 16S rRNA gene has been the gold standard for the taxonomic identification of bacterial communities. This gene includes both conserved regions (used for designing primers) and hypervariable regions (V1 to V9, used to identify different taxa).

The variable areas can be amplified to observe these specific regions and to identify or quantify the presence of a microorganism by looking at this gene. There are numerous strategies to design the amplification primers: some studies suggest that sequencing should include one or more of the V2, V3, V4, V6, or V3/V4 regions, but there are still no conclusions about what are the most adequate hypervariable regions to analyze. The resolution at which taxa can be detected depends directly on the sequencing depth and on the regions chosen to amplify.

This amplicon-based approach has the main advantage of requiring little effort in sequencing, making the analysis very cheap. But the strategy also has some limitations. Between some bacterial species, there are no sufficient differences among their rRNA genes, which would allow clear separation. In addition, many bacteria have multiple rRNA gene copies in their genome, which can blur species quantification results. Other considerations, such as amplification biases or chimera formation make the 16S classification even more difficult.

There are different publicly available databases that contain information about the DNA sequence of the 16S rRNA genes for many known organisms, for example, GreenGenes (with Archaeal and Bacterial 16S sequences) or Silva (Archaeal, Bacterial, and Eukaryotic). They contain information about long subunits (LSU) and short subunits (SSU) of ribosomal genes. The strategy for the taxonomic classification with amplicon data consists of aligning the sequences to the databases. 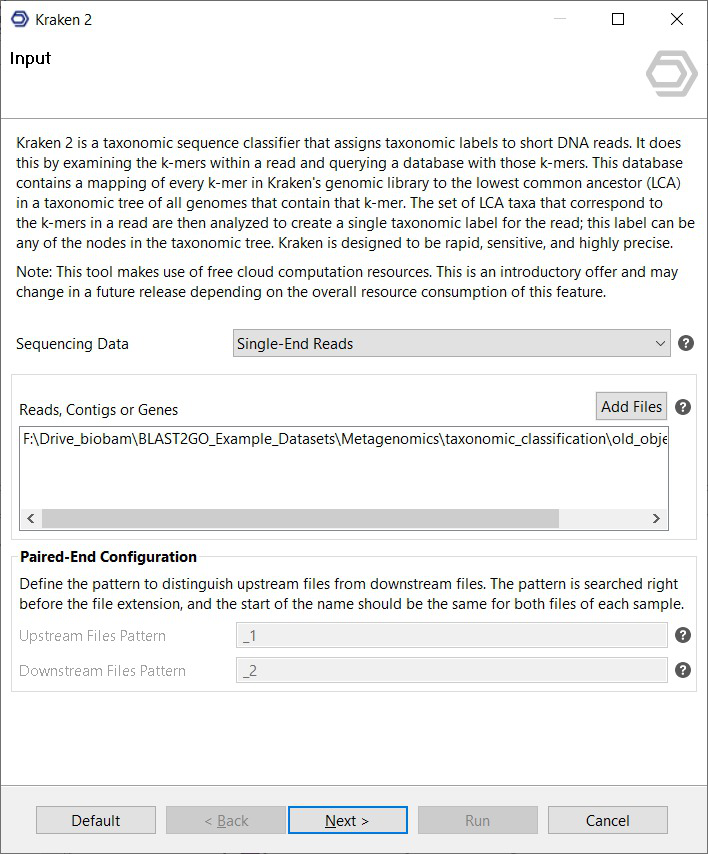 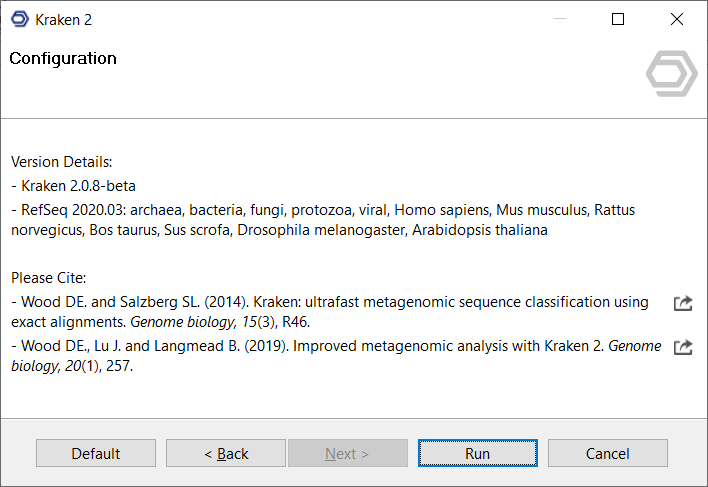 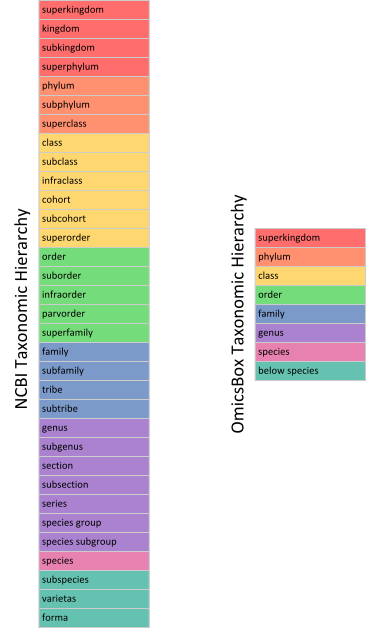 Samples can also be removed or renamed by right-clicking the desired column/samples.

All side panel actions such as the report, bar chart, etc have to be created anew to reflect these changes.

The Stacked bar chart (Figure 6b) is a combined view for inter-sample comparison, separated in the 7 main taxonomic levels. Average OTUs are ordered by abundance from high to low. Only the 500 biggest OTUs are shown for each sample, the remaining are gathered into an extra group called Others. These low frequent OTUs can be analyzed in detail with the Krona Pie Chart. The button Hide Unclassified in the top-right corner shows how the percentages change when only taking into account the data that could be classified by Kraken. 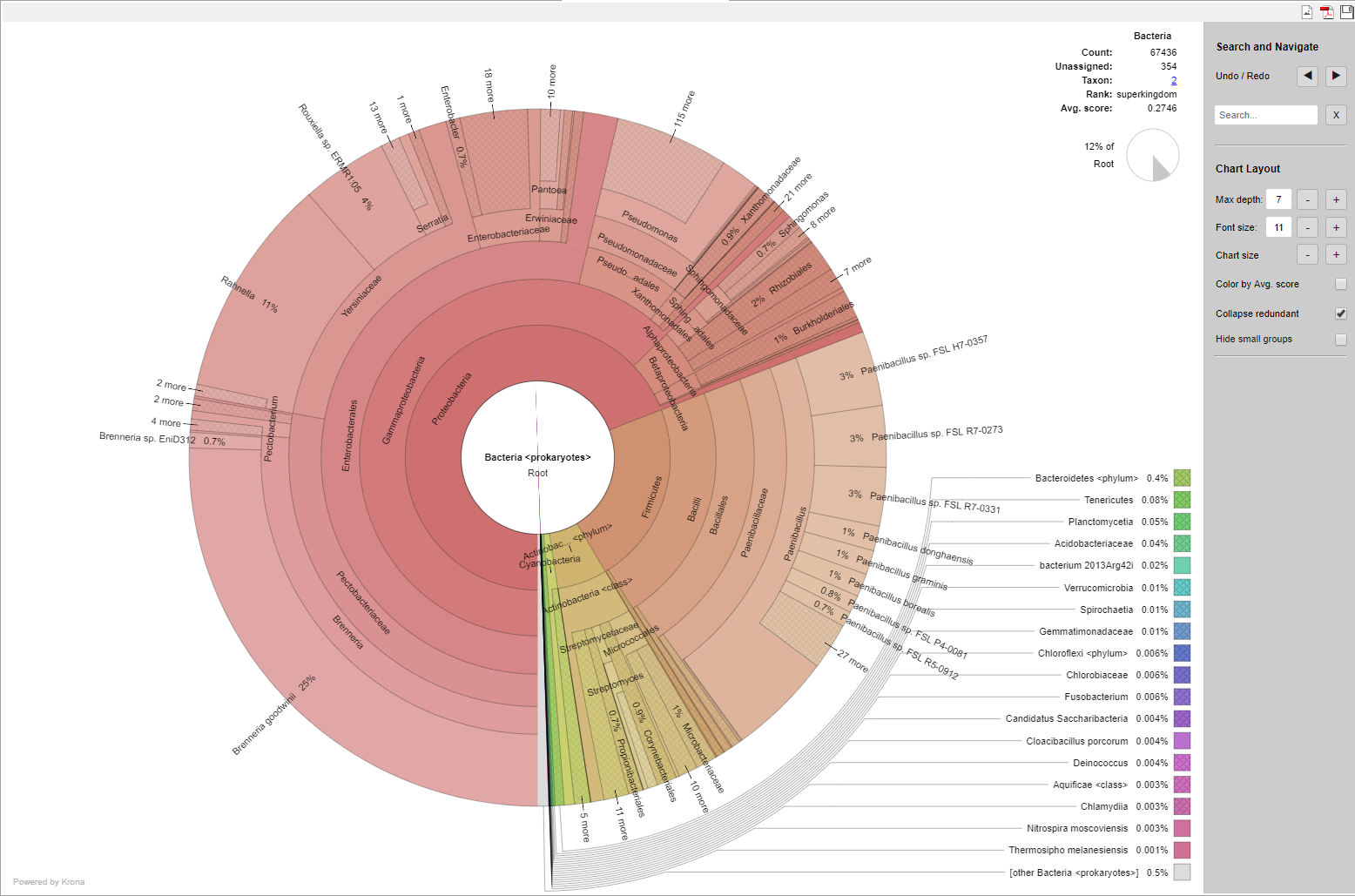 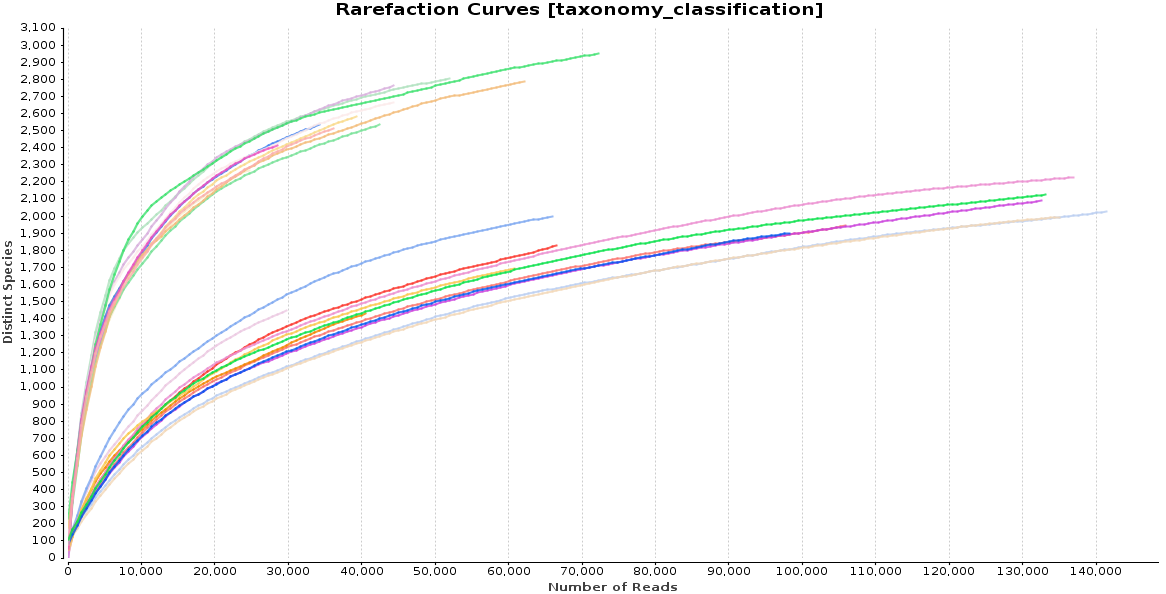