Third-generation DNA sequencing technologies allows scientist to generate longer sequence reads, which can be used in whole-genome sequencing projects to yield better repeat resolution and more contiguous genome assemblies. However, although long-read sequencing technologies can produce genomes with long contiguity, the relatively high error rate of long reads has made it challenging to generate a highly accurate final sequence. An effective strategy to generate highly contiguous assemblies with a very low overall error rate is to combine long reads with short-read data. This strategy can be pursued by using short reads to “polish” the consensus built from long reads.

The DNA-Seq Polishing application is based on Pilon. Pilon is a fully automated, all-in-one tool for correcting draft assemblies and calling sequence variants of multiple sizes, including very large insertions and deletions. Pilon works with many types of sequence data but is particularly strong when supplied with paired-end data from short-read libraries (e.g. Illumina). Pilon significantly improves draft genome assemblies by correcting bases, fixing misassemblies and filling gaps. For both, haploid and diploid genomes, Pilon produces more contiguous genomes with fewer errors, enabling the identification of more biologically relevant genes.

Pilon requires as input a FASTA file of the genome along with one or more BAM files of reads aligned to the input FASTA file. Pilon uses read alignment analysis to identify inconsistencies between the input genome and the evidence in the reads. It then attempts to make improvements to the input genome, including:

Pilon then outputs a FASTA file containing an improved representation of the genome from the read data.

This functionality can be found under Genome Analysis → DNA-Seq Polishing. The wizard allows to select input files and adjust analysis parameters (Figure 1, Figure 2, Figure 3, and Figure 4). 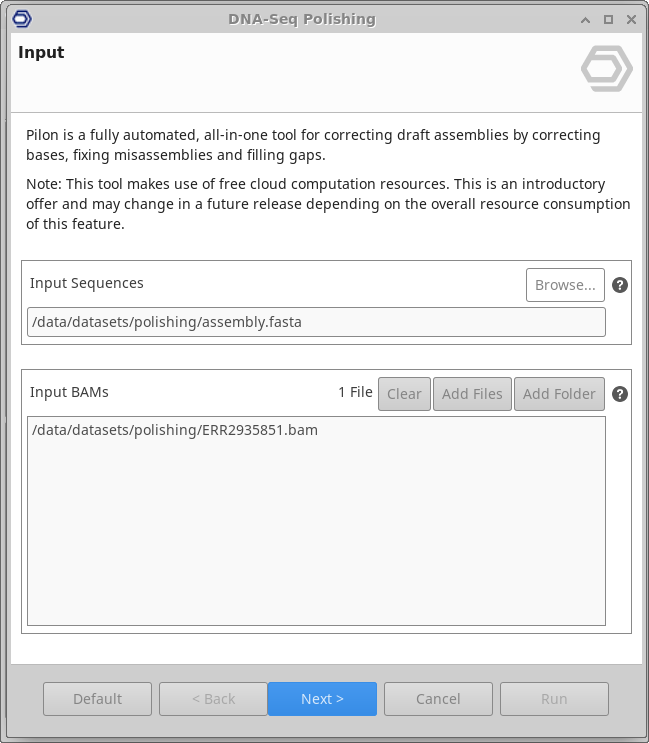 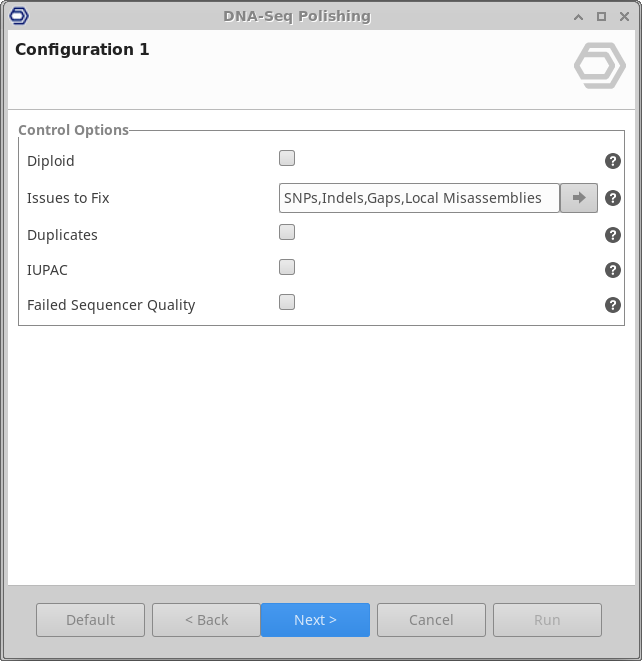 The default value is 0.1. This means that the depth to call is 10% of mean coverage or 5, whichever is greater. 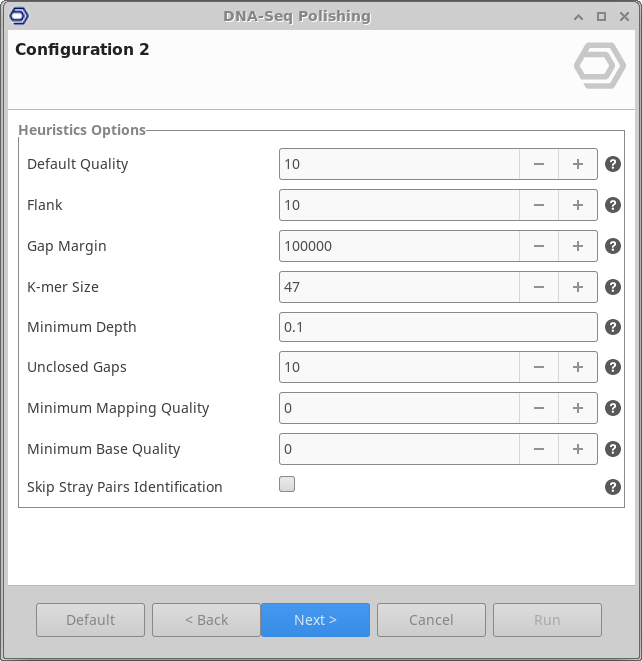 To improve performance, both input sequences and alignments are divided into 100MB batches. 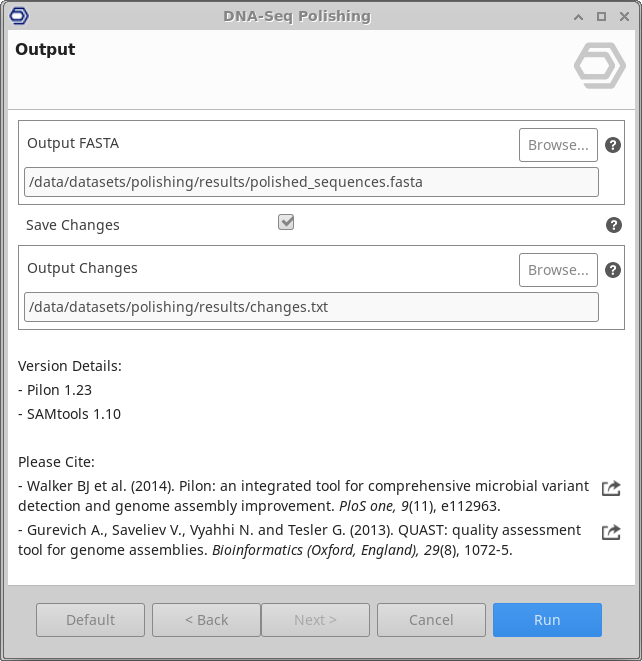 Pilon generates a FASTA file (polished_sequences.fasta), containing the improved genomic sequences. Pilon renames the sequence headers by appending “_pilon” to each FASTA element name. If the “Save Changes” option is checked, Pilon returns a text file reporting all changes applied to the input sequences. The format for this space-delimited file is a follows: <Original Scaffold Coordinate> <New Scaffold Coordinate> <Original Sequence> <New Sequence>.

In addition to the resulting files, a report and 2 charts are generated. The report shows a summary of the DNA-Seq Polishing results (Figure 5). This page contains information about the input sequencing data and a results overview. The Results Overview section shows the number of each type of change that has been applied to the input sequences.

The Nx plot (Figure 6) shows Nx values as x varies from 0 to 100 %. The Nx values are displayed for contigs/scaffolds before and after polishing. 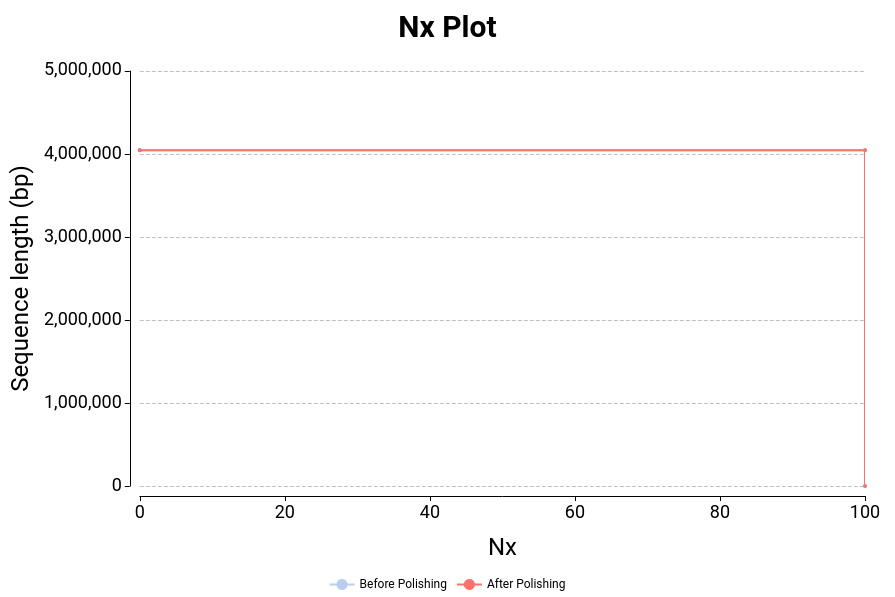 The Fix Type Distribution Chart (Figure 7) displays the proportion of each type of change that has been applied to the input sequences. 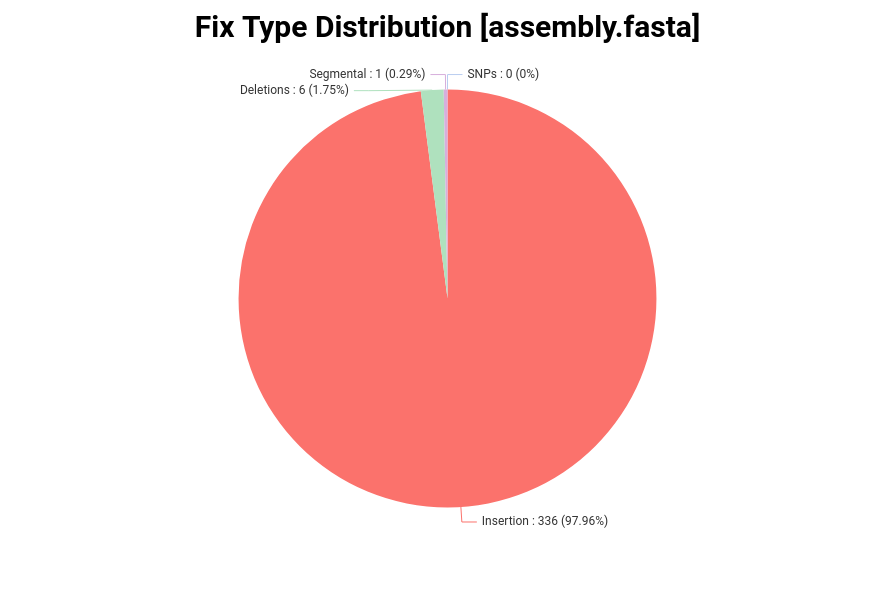