LongQC is a computationally efficient, platform-independent QC tool to spot issues before a full analysis. The tool visualizes statistics designed for erroneous long read data to highlight potential problems originated from the biological samples as well as those introduced at the sequencing stage. It supports major TGS file formats. LongQC relies on k-mer based internal overlaps and skips alignment; therefore, it operates efficiently without reference genomes.

LongQC can be found in the General Tools Module of OmicsBox under FASTQ tools → Long Read Quality Assessment with LongQC. The wizard allows the selection of several sequencing files to be assessed, the possibility to save an optional output result and some analysis parameters (Figure 1).

LongQC analyses TGS reads files from either Pacbio or Oxford Nanopore sequencing technologies. These files should be formatted as the following standard types:

Take into account that LongQC uses per base sequencing quality scores in some of its analyses. If these values are not provided, part of the analyses will not be performed.

There are several parameters that can be tuned to perform a more accurate analysis. These parameters should be adjusted according the type of the input reads:

LongQC works even if the selection of the parameters does not fit the input. However, this could lead to incorrect results or warnings.

LongQC provides an optional FASTQ file that contains the trimmed reads after the adapter detection analysis.

The parameters that control the output are the following:

Box Plots and Histograms are only available for representing a single sample in each chart. Line Plots allow comparing several samples in the same chart.

It contains the next columns (Figure 2):

Coverage is calculated by mapping all reads between them. Therefore, non-sense reads are unique reads that cannot be mapped onto any other sequences in the same file.

A quality value of 7 represents an error rate of 20%.

The report contains the next sections:

LongQC charts can be accessed through the side panel action buttons (Figure 3). All buttons display an specific wizard where several plotting options can be selected.

All charts are grouped in the following sections: 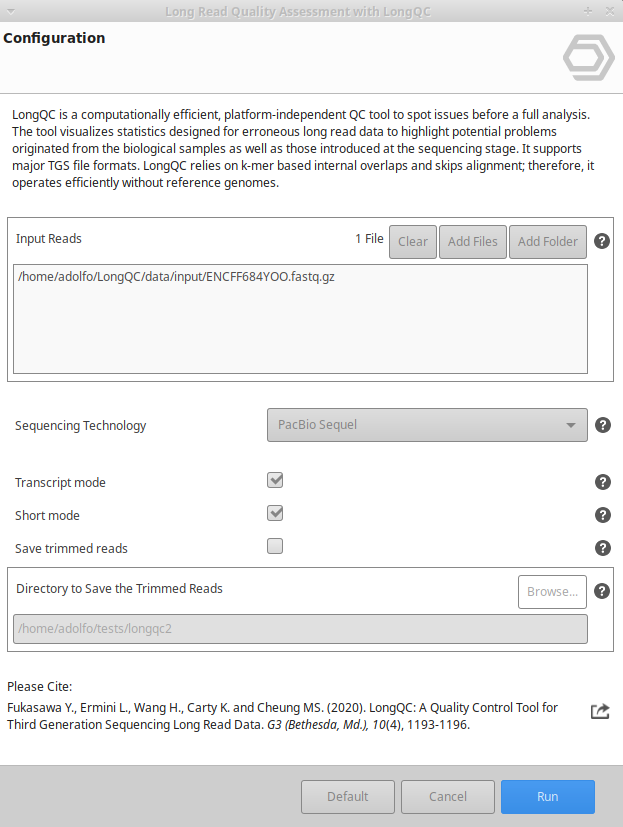 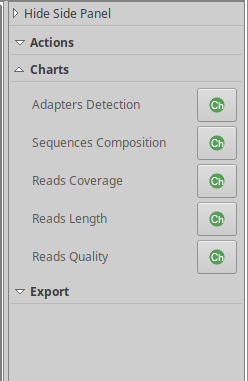