This dataset contains Single-cell RNA sequencing data of Caenorhabditis elegans whole embryos. The dataset has been published by Packer & Zhu et al. The study involves the time series analysis of whole developing embryos of C. elegans to identify the temporal lineage of cell development. The tutorial has been adapted from Monocle3 original tutorial by Trapnell Lab. We will use a small subset of 4,591 cells for this analysis.

Caenorhabditis elegans is an animal with few cells but a wide diversity of cell types. In this study, we characterize the molecular basis for their specification by profiling the transcriptomes of 86,024 single embryonic cells. We identify 502 terminal and preterminal cell types, mapping most single-cell transcriptomes to their exact position in C. elegans' invariant lineage. Using these annotations, we find that (i) the correlation between a cell's lineage and its transcriptome increases from middle to late gastrulation, then falls substantially as cells in the nervous system and pharynx adopt their terminal fates; (ii) multilineage priming contributes to the differentiation of sister cells at dozens of lineage branches; and (iii) most distinct lineages that produce the same anatomical cell type converge to a homogenous transcriptomic state.

Since the original datasets are available in RDS format, we have pre-processed them into individual tables, which are stored in text files in a tab-separated format. Please download the files before following the analysis.

Interpretation of the Results

In this section, we will walk through some important figures' and interpret whether the results are intuitively correct or not.

Distribution of Cells in Pseudotime

The distribution of cells across pseudotime is helpful while interpreting the results.

In a trajectory umap, each dot represents a cell. The color scheme is according to the assigned pseudotime. In Figure 5, the cells residing earlier in the trajectory have been colored in orange, and the cells which come later are colored in green. Also, there is a line that describes the global structure of the trajectory. 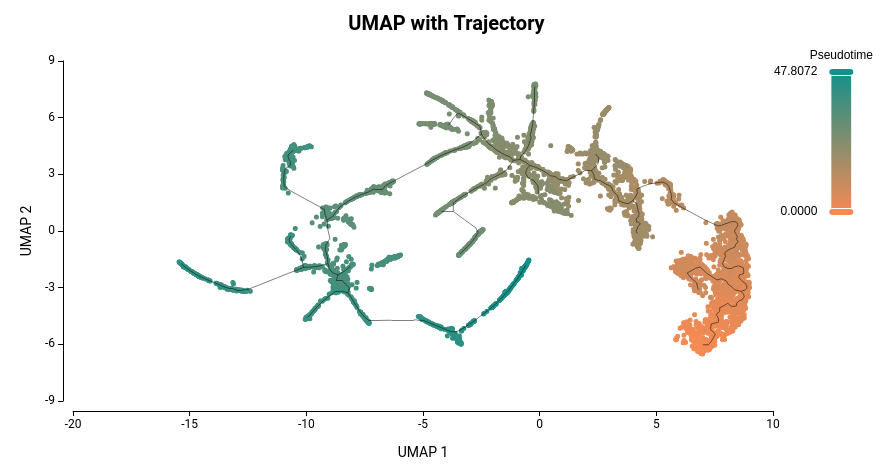