Repetitive DNA sequences are abundant in a broad range of species. The term repeat is used to describe two different types of sequences: low complexity sequences, such as homopolymeric runs of nucleotides, and transposable elements, such as viruses, long interspersed nuclear elements (LINEs), and short interspersed nuclear elements (SINEs). Eukaryotic genomes can be very repeat-rich: for example, 47% of the human genome is thought to consists of repeats. Adequate repeat annotation should be a part of every genome annotation project.

Repeat identification and masking is usually a previous step to the gene prediction and annotation phase. The term 'masking' means transforming every nucleotide identified as a repeat to an 'N', 'X' or to a lower case a, t, g, or c (the latter is known as soft masking). The masking step signals to downstream sequence alignment and gene prediction tools that these regions are repeats. Identifying repeats is complicated by the fact that repeats are often poorly conserved; thus, accurate repeat detection usually requires a repeat library for the species of interest. Also, the borders of these repeats are usually ill-defined; repeats often insert within other repeats, and only fragments within fragments are present, which means that complete elements are found quite rarely.

This application is based on RepeatMasker. RepeatMasker is a program that screens DNA sequences and detects transposable elements, satellites, and low-complexity DNA sequences. The output of the program is a detailed annotation of the repeats that are present in the query sequence as well as a modified version of the query sequence in which all the annotated repeats have been masked. RepeatMasker uses a sequence search engine to perform its search for repeats. In OmicsBox, RMBLast and HMMER are supported. RepeatMasker also uses the Tandem Repeat Finder to detect tandem repeats.

To supplement these databases, OmicsBox allows providing custom libraries, as well as the RepeatMasker edition of RepBase. RepBase is a database of representative repetitive sequences from eukaryotic species. Users can download the RepeatMasker library file from the Genetic Information Research Institute (GIRI) website after requesting an account opening.

This functionality can be found under Genome Analysis → Repeat Masking. The wizard allows to provide input files and adjust analysis parameters (Figure 1, Figure 2, Figure 3, and Figure 4). 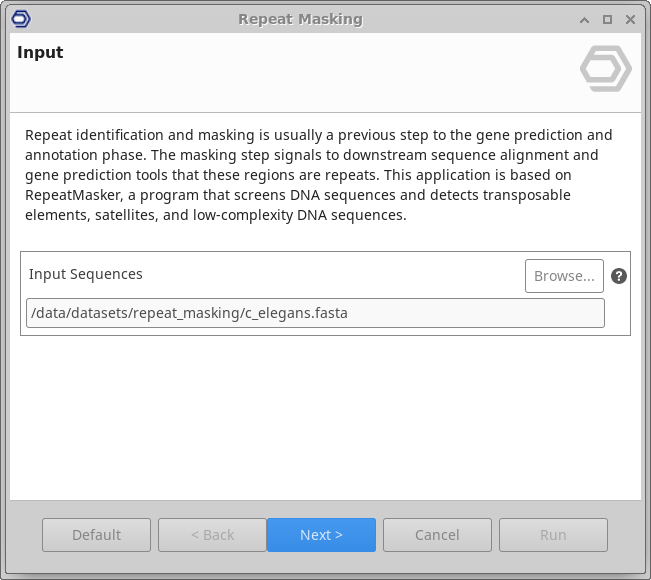 This functionality is compatible with the RepBase RepeatMasker edition 20181026 and 20170127. Make sure you are providing the proper database. 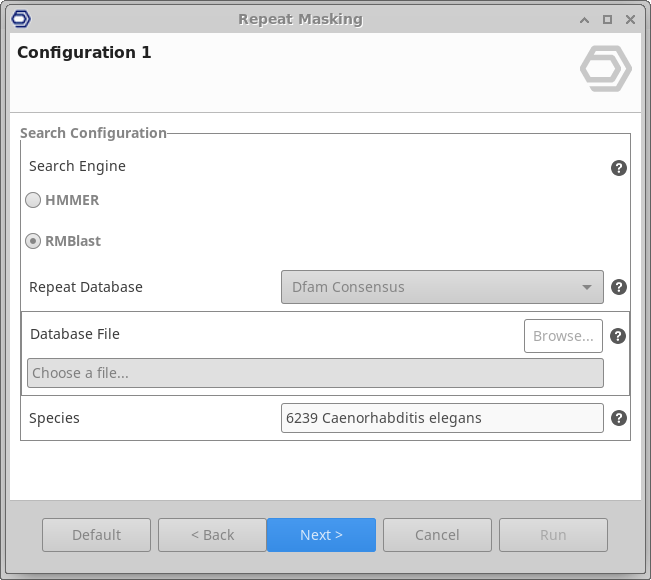 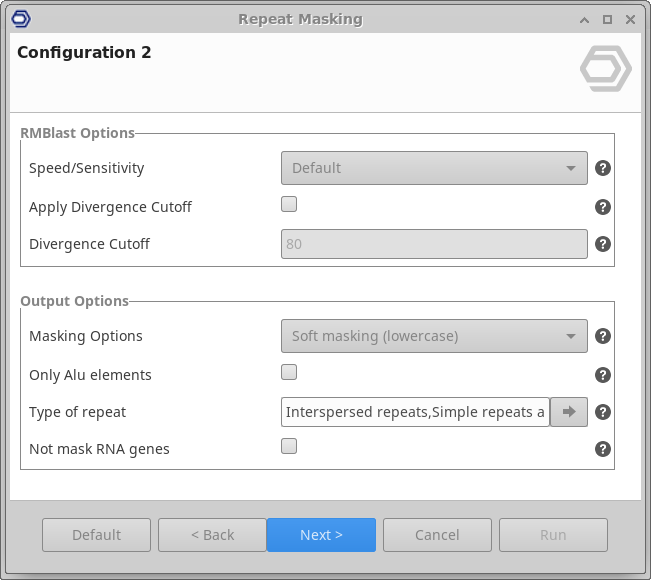 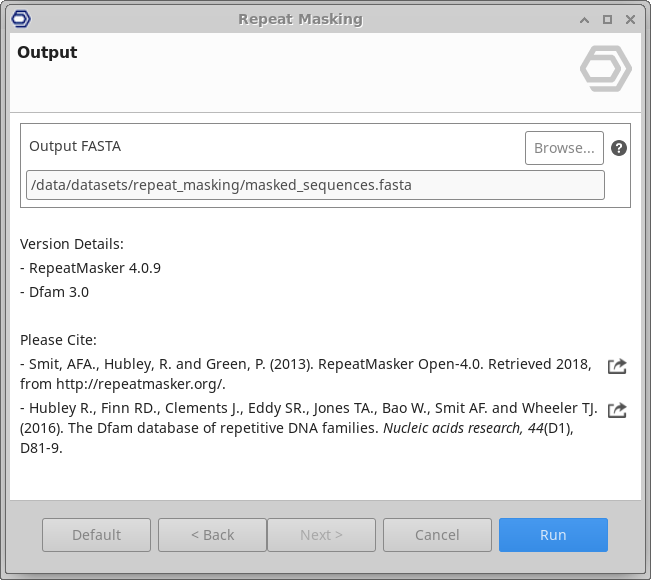 The Repeat Masking process returns the masked sequences in FASTA format and the location of the detected repeats in GFF format (Figure 5 and Figure 6). The repeat sequences found during the procedure are replaced by X, N, or lowercase (according to the selected mask option), so the output FASTA will contain the same sequences as the input FASTA but with the nucleotides corresponding to a repetitive element masked. The coordinates and strand, as well as the class and subclass of each repetitive element, are annotated in the output GFF project.

In addition to the resulting FASTA and GFF files, a report and a chart are generated. The report shows a summary of the Repeat Masking results (Figure 7). This page contains information about the input sequencing data and a results overview. The Results Overview table shows the number of elements, the length occupied, and the percentage of sequence that each repeat class and subclass covers. 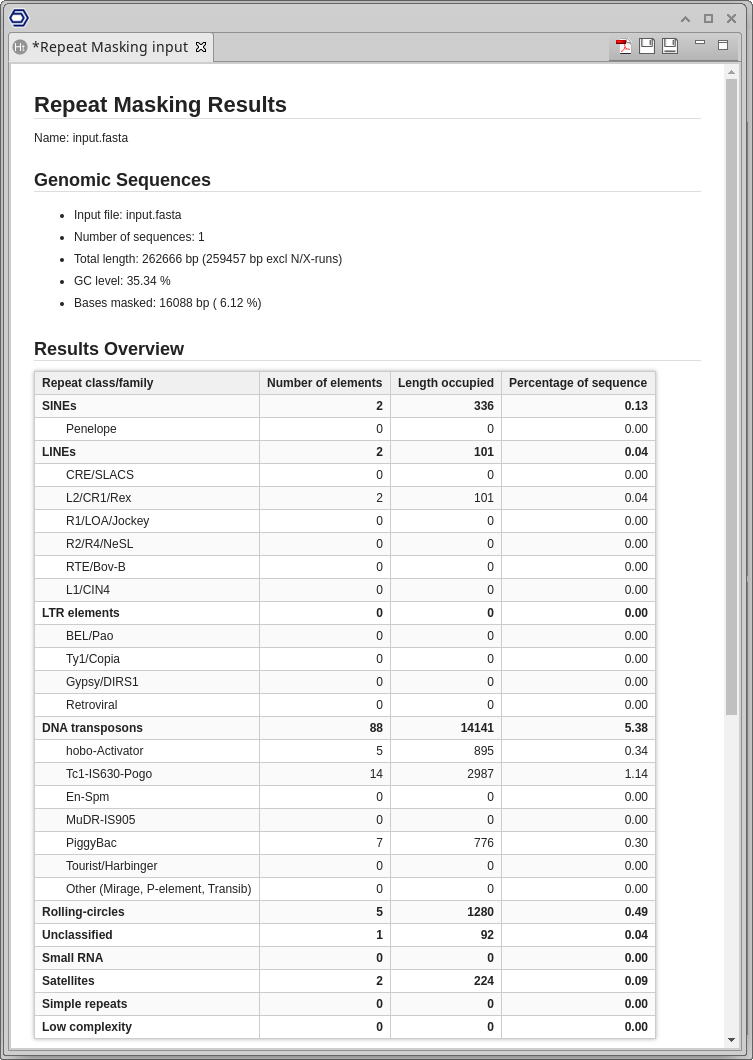 The Repeat Distribution chart (Figure 8) shows the percentage of sequence covered by each repeat class. 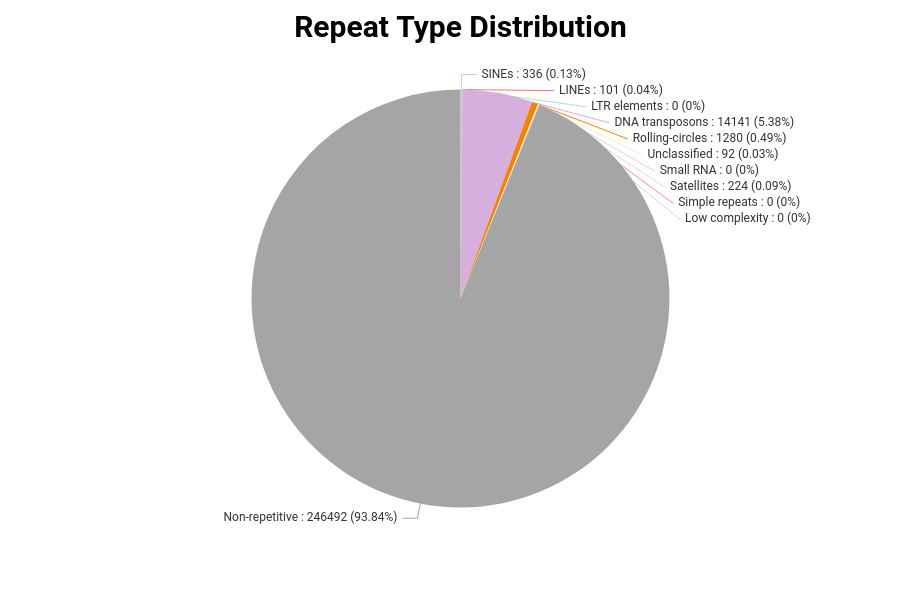